We have been farm workers, dishwashers, soldiers, waitresses.

Today we are ultras—a name we use to designate those who have been transformed by the recent crises and the sequence of riots, blockades, occupations and strikes that followed. Ultras are the segment of generation fucked that has begun to realize that the world as it presently exists in untenable.

We take the name from the football ultras of Europe and North Africa, who, despite appearing apolitical to the traditional left, played an integral role in the insurrections of 2011. This is to emphasize that we are the product of the present moment, in all its ambiguity, with no direct lineage from or allegiance to the “left” of the US or Europe. We are, very simply, the consequence of forty years bought on credit. It is on these terms that ultras can speak as “we,” despite the fact that most of us do not yet know each other. This “we” is only a beginning. Any unity that we may share will be a contingent one, repeatedly tested in fire.

This website, Ultra, is run by a small and growing association of antagonists, young, angry and disciplined. Unsatisfied with dry cynicism and desperate acting-out, we are sharpening our anger through a rigorous rethinking of what we are, where we are, and what might lie ahead. Our goal is to prepare for the future even while interrogating the limits we have already confronted in the struggles following the most recent crisis. When we sum our efforts, what were we unable to overcome? And what questions do these limits raise for us the next time we find each other in the street?

The method that we follow has a simple outline: Lift Weights, Read Marx, Tear Shit Up. This is not a prescriptive program—no one is in any position to claim that they, and they only, have found the only proper path forward. It is instead descriptive. This is, simply, what we do. But we also recognize that others in similar positions are already acting in parallel. Our outlining of this program, then, is also an attempt to link up with those engaged in kindred activity. The phrase itself is shorthand, meant not only to be taken literally, but also expanded:

In order to prepare for an unknown future we have to build a flexible skillset. At the core of this flexibility will be basic factors of physical and mental strength. In the same way that one does not simply train a single muscle group when lifting, the point here is not to specialize in any one field but to build multivalent capabilities on a strong and flexible foundation. Weight lifting is meditation, capable of focusing emotions, intellect and body.

Lift weights, then, means more than just strength training. It means gaining practice in skills as diverse as martial arts, graphic design and childcare. It means: challenge yourself. The gravitational pull of activism is one of the greatest dangers we face as young people who have begun to realize that everything around us is completely fucked. As soon as one starts to perceive the horrors embedded in everyday life, the “left” attempts to latch on like a parasite, rejuvenating itself with fresh blood and immobilizing its host. Lift weights means ripping out the parasite. It means rejecting this culture of weakness and refusing to become the token of someone else’s patronizing politics. Remember: Strong people are harder to kill.

We share the opinion that the globally dominant mode of production, which we unambiguously call capitalism, must be utterly destroyed. Only through the practical abolition of the present system can we discover a beginning.

The Marxist tradition has provided the most rigorous analysis of capitalism’s origins, laws of motion, and internal limits. This analysis is thorough, but far from total—and Marxism, in its essence, makes no claims toward totality. We refer back to Marxism in its origins and in its most innovative experiments, but do not pretend that these can be wholly severed from the internal ossification and defeat of communist practice in the 20th century. That said, we believe that the only earnest critique of the “obscure disaster” of last century’s socialist experiments must itself be communist in character.

Our project, therefore, is one of ruthless inquiry into the conditions of this present moment, which hold the only potential for its overcoming. This is the core of the Marxist method, but is by no means limited to reading the Marxist canon. Through research and direct, on-the-ground inquiry, we hope to elaborate our understanding of how the global accumulation of capital translates into local configurations of power that condition everyday life. Through debate, we aim to develop strategic hypotheses useful for the assault on these conditions and the power that governs them—hypotheses that must then be tested in riots, occupations, blockades, and other forms of attack and self-reproduction that we cannot yet foresee.

We believe that the only worthwhile actions are decisive ones. Research, analysis and preparation, severed from action, become nothing but academic pastimes. Similarly, “organizing” in the abstract is often little more than mindless penance for an upper-middle-class upbringing. At its best, such activism calls us to react—desperately, helplessly and too late—to the various blows exacted upon us by those in power. An austerity program cuts our bus, our food stamps or our scholarship, a police officer murders someone in a neighborhood just like our own. There’s nothing wrong with vengeance. But activism starts from vengeance and dilutes it into a “campaign,” which never goes beyond begging to get back a fraction of what’s already been taken.

Tear Shit Up means act decisively. It means temper your vengeance, choose your targets and be trained for the use of an array of tactics. At the same time, do not be drawn into the macho illusion of “armed struggle.” Insurrection is not reducible to guerrilla warfare, and the most effective disruption of that hostage situation called “the economy” is rarely a head-on confrontation with its armies, police forces and vigilante squads, but instead the obstruction of its lifeblood—the production and circulation of commodities. This entails knowing where to strike and how to shut shit down in a way that goes beyond the creation of a minor spectacle. As much as we all like to dress in black and smash the fuck out of downtown, we have to admit that blockaded ports across the US coastline and burnt-down factories in Bangladesh have a far more monumental impact on rich motherfuckers’ bank accounts.

Those of us who run this website are only a handful of ultras. We hope that the present project offers us the opportunity to meet other ultras produced in the course of the crisis, and encourage you to form crews in your own areas for debate, research and coordination.

So, to you, our fellow antagonists: 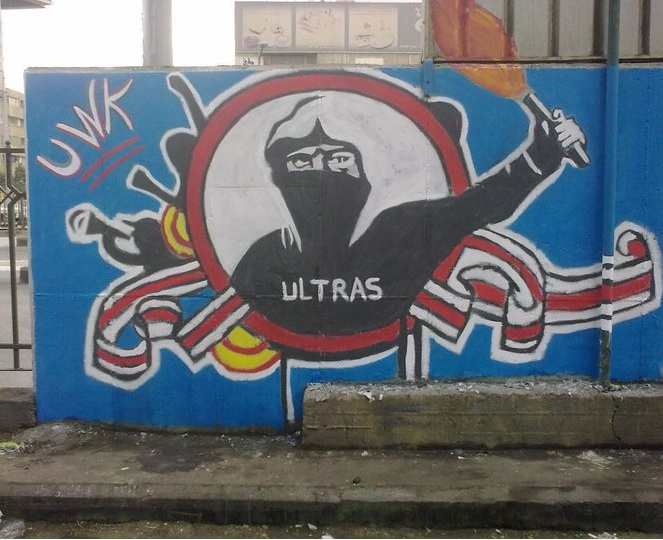