The Anti-Capitalist march took place several hours later. It also started early, leaving pods of protestors distributed all across the city at various meeting points. After an hour or so, each of these pods found the main march, which circled the downtown-capitol hill circuit twice. The march meandered with no set path. It quickly became apparent that the vast majority of people there were by no means activists, nor were they from the city’s anarchist scene. After the riot of May Day 2012, the day’s anti-capitalist march has taken on a life of its own, attracting a diverse swath of youth from all over the city.  There was no riot this year, despite several police attacks and tense standoffs. At one point a wealthy white man in Belltown had his corvette surrounded by the crowd. Seattle’s right-wing vigilante squad, led by Phoenix Jones, was there in force, and they got their assess kicked by anarchists and street kids with sticks. The one that dresses up like a power ranger was body slammed, shit-kicked and had his helmet ripped off. His face underneath the mask was red and very sad, like Peyton Manning.

After being split by the police several times, with a few arrests being made, the crowd recomposed itself and meandered back up to Capitol Hill, where people settled down to celebrate at Seattle Central. Police forced people out of the intersection at Pine and Broadway only to themselves be surrounded by the angry crowd. The police were encircled and shoved out of the intersection. For once, instead of the police shouting “MOVE” and pushing people back with their bikes, the people themselves were shouting “MOVE” and pushing the cops down Broadway.  The police made a tactical retreat to gear up.  Revelers started a fire in the middle of the intersection. The rest is narrated by the photos below.

Throughout the day, we only had the ability to photograph early on in the first march, at the very beginning of the anti-capitalist march, and after the fire was starting on Capitol Hill.  Again: We’ll have some other videos from the interim and a more thorough narrative recap up within the next week.

NOTE: if you are in any of these photos and would like us to take them down, we will take them down immediately. Just e-mail us at ultras@riseup.net 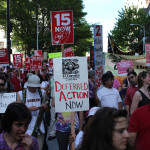 Deferred Action refers to the deferral of deportation procedures. But in this image, the phrase communicates the oxymoronic ambiguity of the protestors’ demands, targetted at President Obama. 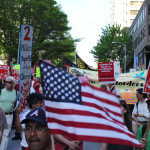 American flags were a prominent symbol in the earlier march. 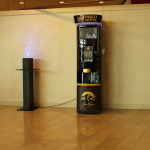 In the food court above the rally where the well-paid NGO chairs, self-designated “community representatives,” and progressive politicans were speaking, we found a succinct symbol of their counter-cultural trajectory. 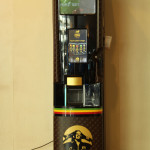 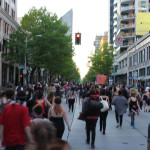 The Anti-Capitalist March began before sundown with several hundred people. In all, the march probably topped out at around five hundred people

After forcing police from the intersection of Pine and Broadway, revelers set fire to trash and advertisements.

The crowd was young, diverse and energetic. 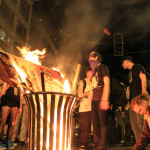 The majority of revelers were not anarchists or activists, but simply young people from all parts of the city 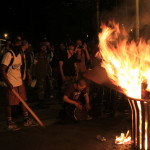 Numbers grew around the fire

People danced and threw more fuel onto the flames 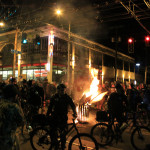 Police moved in to encircle the bonfire 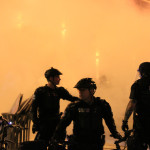 They extinguished the flames, held the intersection for several more minutes, then retreated 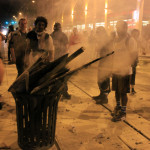 The crowd moved back in 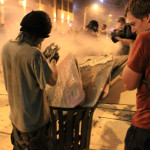 … and re-started the fire 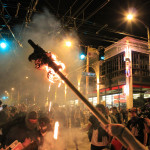 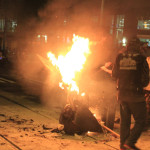 Pressurized containers of some sort kept exploding in the fire, and people began to move back

The fire grew. People gave it some room 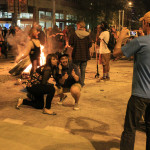 And others took date-night photos and selfies

I don’t know where the trash can went

But the beachball is right there 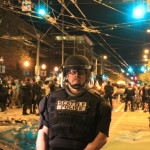 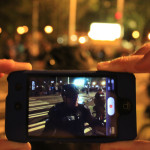 And recorded the interactions of individual cops 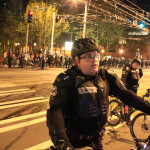 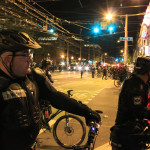 Police held the intersection for an hour this time. Around 1 a.m., people started trickling away 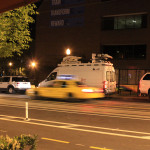 Every single media van had an A spraypainted on it